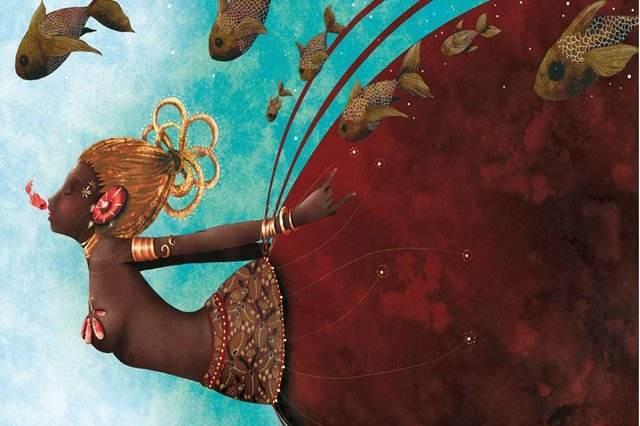 03 Oct Ide Were Were

This is a very old song out of the Yoruban & Santeria traditions – Nigeria, Cuba, & Brazil. I learned recently from Maggie Wheeler that it is about those who serve the Orisha Oshun (sometimes spelled Osun) and the brass bracelets they wore that Oshun asked them to rattle. This somehow managed to be mistakenly interpreted and shared by myself and many others as a “necklace of love,” perhaps due to the devotees adoration of the Orisha.

Oshun embodies love and sexuality and one of her elements is brass. One writer shares, “To understand Osun is to know the intelligence, vitality, caring and nourishing abilities of womankind. Long-suffering, cheated, overlooked, and over-worked, but always committed to the survival of humanity. Besides signifying wealth, brass never rusts, it is eternal. In Osun, we have the embodiment of prosperity, love, beauty, elegance, sexuality and sensuality and a divinely sanctioned feminist.

Oshun is the youngest Orisha (human forms of the sprits and protectors) and one of the most adored in the Yoruba religion. According to the patakís (sacred stories left by the ancestors), she was brought into existence by Olodumare, the Supreme Creator, once he realized something crucial was missing after creating the earth: sweetness and love. As one of the ancient Yoruba myths suggests, the human race would not exist if Oshun had not been sent to our world. It is said her sweet and fertile waters brought life back to humanity.

Recorded by Lisa G. Littlebird with Aimee Ringle on guitar.